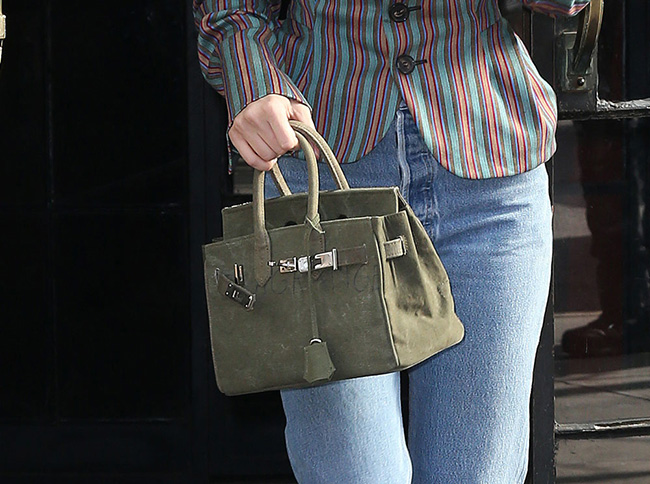 For those who follow the fashion world, the names Bella and Gigi Hadid are instantly recognizable as the young, rising model sister-stars of the street style world. In addition to being born with a certain amount of inherent privilege (genetic and otherwise), the Hadid sisters are practically the poster children for some of fashions most covetable trends.

That is why it was considered an interesting deviation for Bella Hadid, when about a month ago, she was photographed sporting a bag that looked quite a bit like a small-sized Hermes Birkin, but (gasp) wasn't. Upon closer inspection, the fashion world drew in a collective breath. Could it be!? Hadid was actually carrying-around a knockoff!?

The answer to that is yes, and no. The bag is one made by Japanese brand READYMADE, and â€œknocking-offâ€ (I think they'd be more inclined to call it â€œpaying tributeâ€) to some of the most popular bags on the market is kind of their thing; the â€œBirkinâ€ that Hadid was carrying was actually their â€œTravel Bagâ€. However, what makes READYMADE different is that their bags are made completely with repurposed military surplus gear. So what appeared to be the sort of strange, suede-like fabric of Hadid's â€œknockoffâ€ Birkin actually was used military-grade all-weather canvas.

Armed with the knowledge of what the bag actually is, does it change our collective outlook? Again, at least for this writer, the answer is yes, and no. Yes, it is a cool idea to create some of popular culture's most iconic bags in repurposed format, but does the end justify the means? This is where the answer may be a resounding â€œnoâ€. After all, if it looks, acts, and feels like a knockoff bag, isn't it still really a knockoff bag? Well, yes. Until you get to the price point. The READYMADE travel bag will set you back upwards of $2,200 â€“ a price point that only the privileged would even consider shelling-out for a replica bag.

So while theoretically Hadid's bag may have been an attempt at a political statement, it was one done through a distinct filter of privilege that makes the whole thing fall as flat as the olive green canvas it's made with.