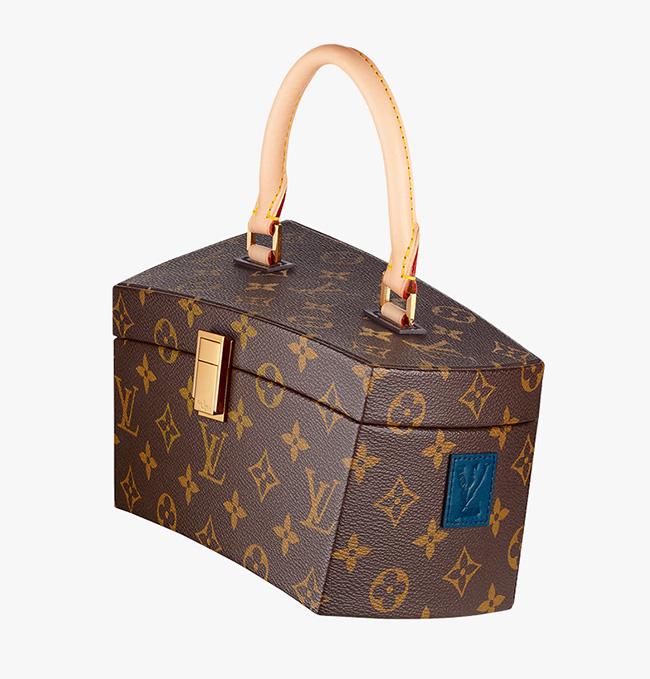 Whether it’s a car, a brand of moisturizer, or (naturally) a handbag, savvy designers are always clambering to get their bags on the arm of the world’s most recognizable household names. Sometimes however, the rare celeb just wants to carry a bag that’s unique and fun. With the fashion shows in full swing and a-listers attending in droves, it’s been a great week to be a bag-spotter. Far and away, Alexa Chung took home the uniqueness prize this week for her Louis Vuitton x Frank Gehry Twisted Box Monogram Bag, which has been previously spotted on another style trailblazer, singer Rihanna.

If you think about a time when you might have accidentally left your trinket box on top of a radiator, or perhaps stored something too heavy on top of it over a long period of time, you’ll already be familiar with the unconventional shape of the Twisted Box Monogram Bag from Louis Vuitton.

A handbag with such angular, sharp lines may seem strange to many, but in a way it is a bit of a forgone conclusion when you consider the designer. Frank Gehry, the award-winning Canadian-American architect is responsible for the design, isn’t exactly known the world over for his softness of line or weakness of aesthetic. Frank Gehry is after all, the man who brought us the Guggenheim museum in Bilbao, Spain and the Walt Disney Concert Hall in downtown Los Angeles; both structures that make the most out of his rising, angular, and twisted (and we mean that literally) design ethos.

The Louis Vuitton x Frank Gehry Twisted box Monogram Bag was part of a limited-edition run called the Iconoclasts collection which debuted in the Fall of 2014, and in addition to Gehry featured such big hitters as Christian Louboutain, Karl Lagerfeld, Cindy Sherman, Mark Newson, and Rei Kawakubo.