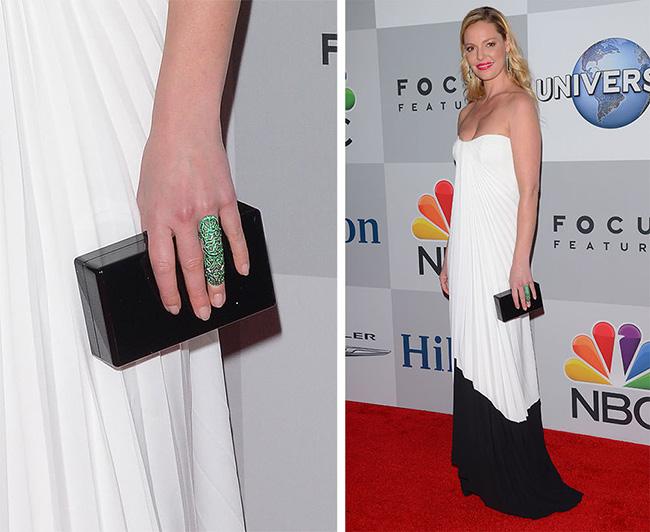 Goodness knows that the red carpet has seen its share of crazy occasional bag designs. Over the past decade or so, it almost seems like designers of occasional bags seem to be having a contest among the ranks to see who can design the kitchiest, the most irreverent, or the most blinged-out evening bags possible. Design houses such as Charlotte Olympia and Judith Leiber are always at the front of the pack, designing everything from clutches in the shape of perfume bottles and alarm clocks to miniaudieres encrusted in precious metals and gemstones. Red carpet awards shows are natural showplaces for such wild and wonderful bags, and it follows that year after year, many celebrities are spotted running the red carpet gauntlet with these whimsical creations in hand.

However, at this year's Golden Globe Awards, the winds of change appear to have begun to circulate through the celebrity ranks. More than a few celebrities made a rather abrupt departure from this ongoing trend, and opted to carry something much more minimalistic. Actress Leslie Mann let color speak for itself at this year's Golden Globes by choosing a sleek, gold-framed Ferragamo clutch to carry with her sequined canary yellow Kaufmanfranco column gown and emerald green Kimberly MacDonald jewels. In this instance, her bag became so much more than just an afterthought; it was an accessory that had a large impact on her overall look. Similarly, actress Katherine Heigel chose a simple, quiet black Edie Parker box clutch to accompany her black and white Monique Lhullier strapless gown. The monochromatic look was spot-on; her minimalistic approach to accessorizing enhanced the effect of the flawless fit and design of the gown, and helped to complete the graphic effect.