A Not So Merry Christmas for British Handbag Counterfeiters 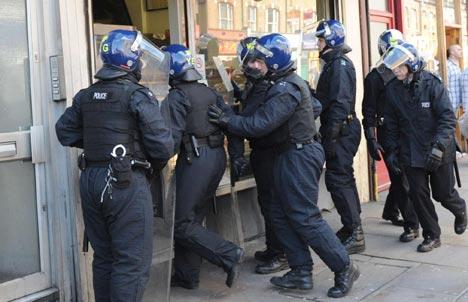 The counterfeit goods industry is worth approximately 3 billion a year in the United Kingdom alone, and shows no sign of slowing any time soon. Despite the widely-held belief that purchasing a counterfeit handbag is nothing more than a bargain-hunter’s prerogative, this practice is anything but a victimless crime. As much as 79 percent of counterfeiters have direct ties to organized crime; everything from money laundering to drug and weapons dealing, and perhaps most worryingly in our current political climate, international terrorism.

This past November however, one counterfeiting ring in Manchester, United Kingdom was forced out into the open, when a police raid ended in 37 arrests, and a seizure of a million cigarettes (yes, you heard that right, a million), 70 kilos of tobacco, and a massive haul of counterfeit goods that included an especially large haul of fake Gucci handbags.

Just before 11 am, Tactical Aid Unit officers descended upon four different addresses in an English neighbourhood that has become known as the “counterfeit capitol of the UK”. Entry to the premises was extremely difficult, with police having to cut through a steel door and several sets of shutters with the aid of a metal cutter in order to gain access to the inner sanctum of the 5-floor residence. The home boasted multiple rooms, all filled to the gills with counterfeit handbags. Also on the premises were piles of logo labels, all purportedly there in order to be attached to logo-free goods that would arrive into the country in a separate package.

Although the police at the scene reported that the goods themselves were not particularly unusual for that part of town, it was the sheer volume of counterfeit handbags that was so staggering. In a press release immediately following the raid, the Police commissioner for the Greater Manchester area was quoted as saying that the goods were most likely funding terrorist activities abroad.