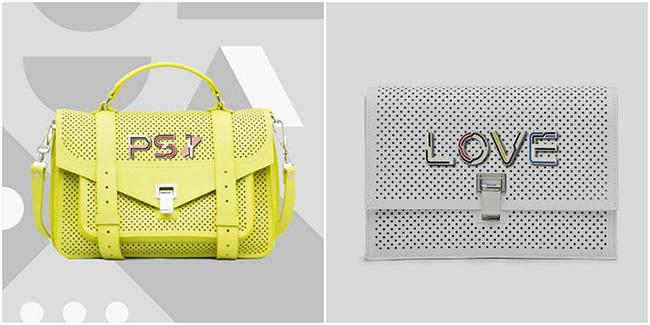 These days, to “pin” something takes on a very different meaning than it did a few decades ago. In the 1980s, to “pin” something literally meant to stick a pin on it, not post it to a virtual mood board that you could share with others in the public social media complex of cyberspace.

However, it appears that in the world of handbags, “pinning” something may very well be reverting back to its older, 1980s meaning, if only for a season or two. What the fashion cognoscenti has officially dubbed “pin culture” has really been gaining traction in the last few months, and the latest (and arguably most exciting) way that this has caught on is within the handbag industry.

It was a trend that was originally started by Anya Hindmarch's handbag stickers, but it was really Proenza Schouler that has now really got the trend going strong. They've launched their latest line of handbags crafted from perforated leather — just the right material to easily stick a few pins into without harming the integrity of the bag! Aptly named “PS Pins”, the recently debuted line has been a real hit with the fashion elite. Pinning a handbag or garment (the “old” meaning of pinning, mind you) has always been a way to really express your individuality; there are no two people on the planet that will be drawn to the same combination of pins in the same order. It just so happens that Proenza Schouler is also providing the wearer of their bags with a selection of pins as well. Smart move; the pins come in letters and numbers, and can be purchased for a healthy $75 each — a far cry from the 50 cent peace sign buttons of some of our 80s youths, but a great customization tool nonetheless.