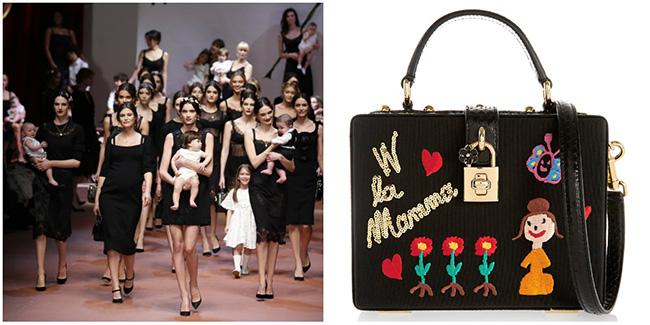 At the recent Fall-Winter 2015/2016 collections, Dolce and Gabbana appeared to present a collection that was all about celebrating traditional Italian motherhood. Pregnant models walked the runway, while others carried babies and toddlers in their arms. It all seemed very heart-warming; a celebration of the circle of life with Dolce and Gabbana's signature heavy-handed Italian spin. But that was before the interviews.

When asked about the collection in the interviews that followed, the pair responded surprisingly; they came out quite strongly against same sex marriage and non-traditional families. Dolce stated that “you are born to a mother and a father — or at least that's how it should be. I call children of chemistry synthetic children.”

Gabbana also weighed-in, stating that “the family is not a fad.”

The duo's comments angered some very high-profile people, including Sir Elton John and his partner David Furnish, as well as NBC's Today Show host Al Roker, who both leaped to the defence of non-traditional families on social media.

Admittedly, this is an odd stance for Dolce and Gabbana to take. While the pair (who were themselves a romantic couple for over 20 years before splitting but remaining business partners) may have their reasons for wanting to promote what they perceive as the institution of a traditional family unit, in light of their comments, their Fall/Winter 2015-2016 shoe seems to take on an altogether different patina; one that is more socio-political commentary than homage. Some have even argued that if the duos believe that the family unit is indeed “not a fad”, it may perhaps not have any place being on the runway at all, making their campaign exploitative at best.

As with many things in and around the fashion world, the true test will likely be whether or not customers are willing to embrace Dolce and Gabbana's campaign. There is perhaps no better marker of how a collection is received than the popularity of its associated handbag line. The LaMamma handbag will almost certainly divide the crowd; its sophisticated shape and elegantly finished hardware are in stark contrast to the embroidered, childlike embellishments on the bag. With a price tag of nearly $3,000, we're predicting that it's probably going to be a tough sell. After all, the women (many of whom are mothers) that make up their core demographic are nothing if not pragmatic.