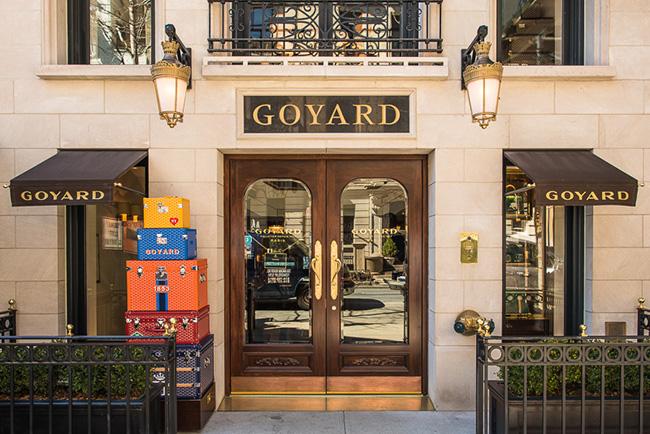 French leather goods maker come luxury handbag brand Goyard is the oldest business of its kind. Founded in 1853 in Paris, the company is exactly one year older than its biggest (and arguably more well-known) competitor, Louis Vuitton. However, unlike Vuitton, Goyard has historically shied-away from the world of social media and massive, no-holds-barred advertising campaigns, opting instead for the quieter, more mysterious word of mouth appeal that comes along with a century-old reputation for quiet luxury.

While the design house's public marketing strategy hasn't changed much over the years, the way their New York customers will go about sourcing their product certainly has. To the delight of handbag enthusiasts everywhere, Goyard has just opened a gorgeous new store on New York City's Upper East Side, bringing a little slice of iconic Parisian style to one of New York's most prestigious neighbourhoods.

Goyard's expansion of its retail outlet reach is in part due to the company having been purchased from the Goyard family back in 1998. Although Goyard does not have the backing of a major luxury goods group (as does its competition Louis Vuitton), the new owner, Jean-Michael Signoles, is carrying-on the tradition of maintaining it as a family-run business. Signoles and his two sons have overseen Goyard's slow re-invention in a very careful and measured way that pays respect to the brand's rich heritage.

Goyard is perhaps best-known for its long association with royalty. The Duke and Duchess of Windsor became customers of the brand in 1939, with the queens of Yugoslavia and Greece (among many others) following suit just after World War II. In the years since, French celebrities such as Edith Piaf and Catherine Deneuve were spotted with Goyard trunks and bags, and the brand's popularity has spread quietly and steadily on an international scale ever since.