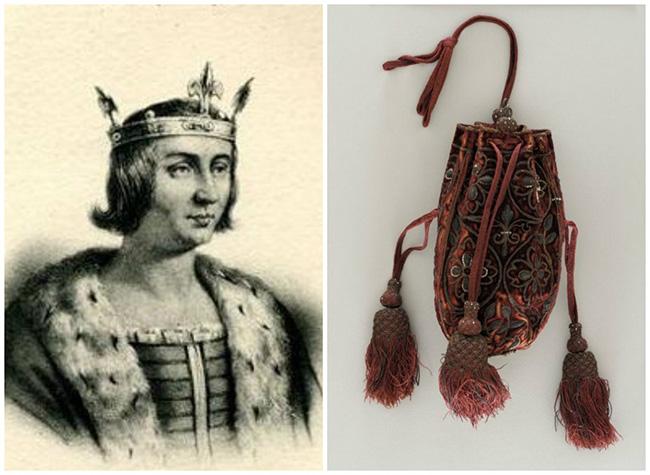 By now, most handbag enthusiasts have seen one of the many celebrity “What's In Your Handbag” pieces, where popular public figures show us their designer purses, and in doing so provide us with a voyeuristic peek inside the hidden inner sanctum of their handbags.

Using this as our model, we thought it would be cool if we could go back in time, peering inside the handbags of some of history's most prominent figures. While there is no way we can know exactly what may have been inside said handbags, when taking the historical context into consideration, we can venture a pretty good guess.

Purses were popular with men of the 14th Century, and not just because pockets would not be invented for several hundred more years. While it is doubtful that King Louis X needed to carry much money around (as was customary for men to carry inside their purses), the purse would have still been an important accessory in the King's wardrobe. Known as “The Stubborn” and “The Quarreler” Louis likely kept things in his purse that would help him solidify his rank and ability to be right about all things; a few coins to toss at servants, small gifts that were bestowed upon His Majesty; basically anything that took to his fancy (and that would fit inside the purse) would have been fair game in those days.

King Louis most likely carried a silk drawstring bag, which would have been fastened around the waist by a long cord, or “girdle”. In the medieval days, the more embroidered the purse, the higher the social standing of the wearer, and we can only imagine that King Louis' purse would have been a handsome specimen indeed.