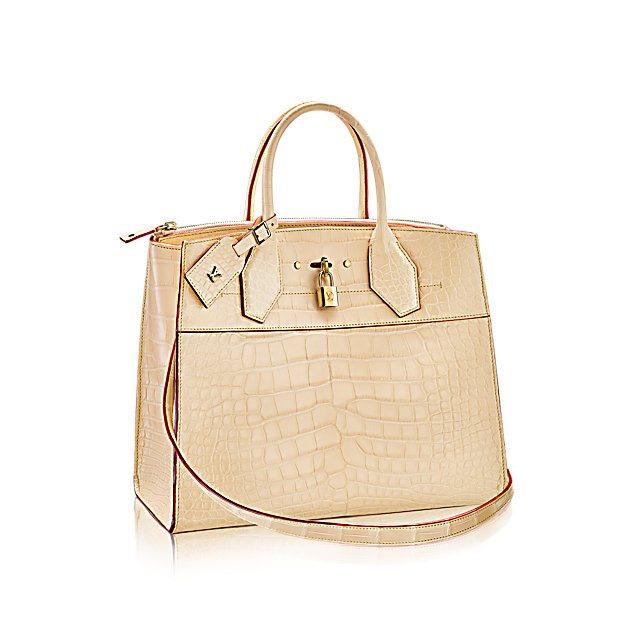 Louis Vuitton’s newly-minted creative director, Nicholas Ghesquiere, has taken the brand by storm, and shows no signs of slowing down. With the holiday season bearing-down upon us, the brand has launched what many are calling its most expensive handbag ever. What’s the bag that’s making such a splash? A beautiful top handle tote with a shoulder strap called the City Steamer Bag. The crocodile version of the bag has a set retail price of an eye-watering $55,500!

Technically, the Crocodile City Steamer is not the most expensive bag that Louis Vuitton has ever produced. According to the internet’s undisputed authority on handbags, Purse Blog, Louis Vuitton has made two more expensive bags in the past. However, both of these bags were miniaudieres; both had price tags over $100,000, and both were limited edition pieces. To quote Purse Blog’s take on the matter, it “kind of seems like cheating” to compare limited edition box clutches made from different high-end materials to a handbag that is essentially made from more traditional materials like leather, various linings, and hardware.

Whether or not you want to count Louis Vuitton’s latest offering as the most expensive bag they’ve ever produced, there is one point on which we can all agree; Nicholas Ghesquiere is absolutely on fire. Not only did he knock it out of the park last season with his debut ready to wear collection (thereby increasing the company’s stock overnight), but he also may have just produced the first, and to date the only handbag that may be able to stand up against the long-dominating Hermes Birkin as the industry’s dominant luxury handbag and status symbol.

The best thing about the Crocodile City Steamer Bag? It’s really, really beautiful, and perhaps made all the more so because it marks a new era for Louis Vuitton; one of exclusivity, refinement, and timeless design. But don’t get too excited just yet. If you happen to have an extra $55,000 lying around and would like your own city Steamer Bag, you will have to call Louis Vuitton to see about obtaining one.